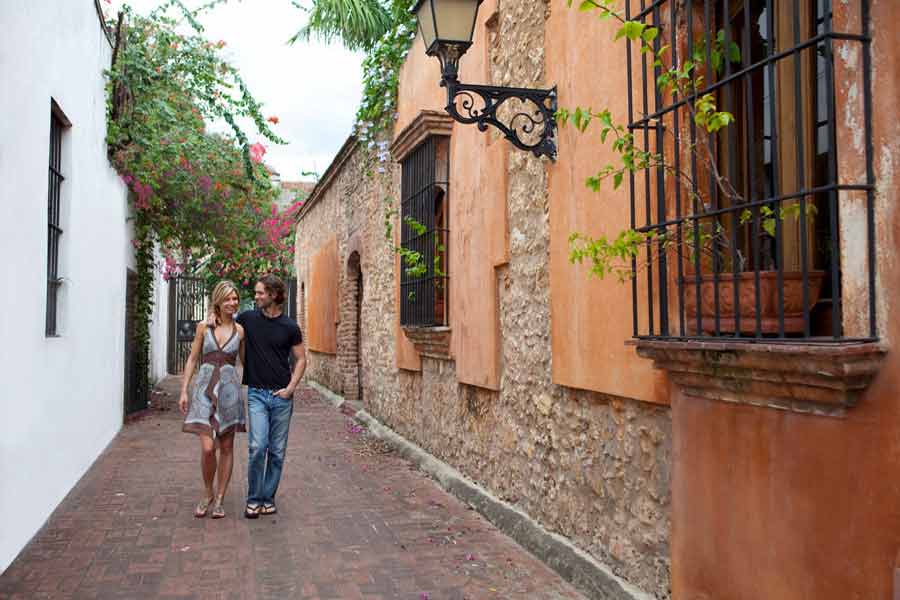 Zona Colonial, in English The Colonial Zone is the #1 tourist attraction in Santo Domingo. Santo Domingo is the oldest city in the New World and was founded by Christopher Columbus and his younger brother, Bartholomew Columbus in 1502, just after Christopher Columbus discovered the island of Hispaniolain in 1496 (present day Haiti and the Dominican Republic). The part of the city inhabited in the early 1500’s is now called the Zona Colonial. Zona Colonial boasts of many firsts for the New World. The first paved street, university, cathedral, castle, monastery, hospital and fortress – to name a few. With beautiful architecture and the rich history, Zona Colonial is a must see while visiting Santo Domingo. Zona Colonial has been classified as a World Heritage Site by UNESCO.

In the Zona Colonial, along with the beauty of the historical buildings, you will find: hotels, restaurants, cafes, museums, bars, shops, etc. This is just one of the reasons why it is the most visited tourist attraction in Santo Domingo. The two most famous streets in the Colonial Zone are Calle Las Damas (the street of the women) and Calle Conde. Calle Las Damas was the street the women of high society walked after church on their way to lunch. Calle Las Damas is an amazing street during the day, but it becomes even more amazing at night as the street lights turn the walls of the buildings a beautiful orange hue. With every step you take on the first paved street of the New World, you travel back deeper in time until you feel as though you are in the 1500’s walking next to Christopher Columbus.

Hotels In The Colonial Zone

There are many hotels to choose from and they provide a wide range of prices from economical to elegant. What is nice about the economical hotels in this area is that they are clean and staffed with friendly people – with many speaking English. Keep in mind that these are old buildings, and, while they are clean, most rooms are small and have “Old Building” issues. Still, for the price I think they offer a great product in a great area. There are many of these hotels and with many offering different specials at different times, it is hard to recommend one specific hotel. One of the main benefits to staying in the Colonial Zone is when you walk out the door of your hotel, you don’t need to pay a taxi to take you to a location to enjoy. You are already at the # 1 tourist attraction in Santo Domingo.

On the higher end there are several hotels to enjoy, but I will talk about Hodelpa Nicolas De Ovando. This hotel has spacious guest rooms, a nice courtyard out back to enjoy the evenings, a small bar, good food for the breakfast buffet and for a dinner menu, but the best two aspects of this hotel are its history and its architecture. Nicolas de Ovando, a travelling companion of Christopher Columbus, was the 3rd governor of the Indies and this hotel used to be his home and dates back to 1502. This hotel is located on Calle Las Damas (the first paved street) in one of the first houses built, so to me there is no better place to stay to be able to immerse yourself in the culture of the oldest city in the New World. But don’t worry if the hotel is outside your budget, you can visit it and enjoy a cocktail at the bar or in the courtyard.

Things To “Do And See” in the Zona Colonial

I highly suggest your taking the walking tour on the Colonial Zone and to make it one the first thing you do when you arrive in Santo Domingo. Once you understand the buildings and their history, you will be able to enjoy them more. For example, if you are sitting in the Spanish Square (Plaza Espana) enjoying a nice dinner at say, Pate Palo, the first restaurant in the new world and where Sir Francis Drake ate at in 1586, as you look across the square you will see a stone building, it will not just be a stone building anymore because, after taking the walking tour, you will understand this is the house of Christopher Columbus’ son, Diego Columbus. After touring this house you will have a good understanding how people lived in the time of Christopher Columbus. The walking tour of the Colonial Zone typically lasts 2 to 3 hours.  If you would like help arranging a walking tour of of the Colonial Zone we can help  you with this.

The next section will talk about some of the buildings worth seeing and many of these will be included in the tour.

Buildings, Museums, and Historical Attractions in The Colonial Zone

The house of the son of Christopher Columbus (Diego Columbus). This home has been turned into a beautiful museum with some original furnishings and some reproductions of the original furniture. Walking through this house will give you a feel for how Columbus lived in the 1500’s.

This probably the most historically significant street in the city. It was the first paved street of the Americas and it was also the street the women of high society walked after church to attend lunch. This is why it is is called Calle Las Damas which in English means the street of the women. The street is filled with buildings from the 1500’s that are now turned into museums, hotels, restaurants, etc. Draw in the history as you walk down this street.

This is probably the 2nd most important street in the city. This street is closed to cars and is filled with shops, cafes, restaurants, hotels, and it has a small park, Parque Colon (Colon Park) in the middle and, at the far side of this street, has the Parque Independencia (Independence Park). This street was the main commercial area in Christopher Columbus’ time.

See the remains of the building that housed the Franciscan fathers back in the early 1500’s and was commissioned to be constructed by Nicolas de Ovando the 3rd governor of of Santo Domingo.

Ruins of the San Francisco Monastery

See the remains of the building that housed the Franciscan fathers back in the early 1500’s and was commissioned to be constructed by Nicolas de Ovando the 3rd governor of of Santo Domingo.

Construction started in 1503 by the orders of the 3rd governor of Santo Domingo, Nicolas de Ovando and was completed in 1522. This hospital was one of the most modern hospitals of its time.

This building originally housed the church for the Jesuits, later turned into a mausoleum to house the remains of some of the most notable national, civilian and military heroes of the Dominican Republic.

Columbus Park is located just off Calle Conde across from the Hotel Conde and bordering the Cathedral de Santa Maria, it is a great place to sit on a park bench under a tree and take a break from visiting the museums and ruins to soak in the beauty and the culture.

There are many restaurants, bars, cafes and nightclubs in the Colonial Zone. I will focus on the ones that have historical significance, the ones that I have enjoyed and some that our past clients have enjoyed.

One of the newer restaurants located on Calle Conde is known for its Dominican entertainment (dancing/music) and good traditional Dominican food. Located across from the Colon Park (Parque Colon) and the 1st cathedral of the new world, the Cathedral of Santa Maria this restaurant is in the heart of the Colonial Zone. This is a great spot to try some classic Dominican food, enjoy the local singers and dancers while escaping the Dominican heat with the restaurants excellent air conditioning.

At the end of Calle Conde is a very famous café/diner named Grands, formerly Pacos. This restaurant is open 24 hours a day and is a great place to get a coffee and some breakfast to start your day off. This is not a fancy place but a regular café that on any day of the week, you will see people gathering here to enjoy a good conversation with their coffee, and Dominican style food, no matter the hour.

is a great place to enjoy a cocktail and dinner. It is a very trendy location that is upscale casual.

Located on Calle Conde, this Italian restaurant is an excellent location not only for food but for people watching. They have great coffee in the morning to start your day off, and their pizzas are excellent as well.

Overlooking both Plaza Espana (Spanish Square) and Alcázar de Colón (Deigo Columbus’ house) there are 8 restaurants located in a row. These restaurants are housed in buildings that were originally used as warehouses to store the goods such as tabacoo that were to be send back to Spain. Each of these restaurants has a menu located in front of the restaurant in Spanish and English so you can reveiw the menu before entering. All 8 restaurants are elegant and the longest running restaurant in the New World is one of these 8 – Pate Palo (the wooden leg) which is a 500-year-old restaurant that Sir Francis Drake once ate at in 1586. Whether you eat at Pate Palo or one of the other 7, you can’t go wrong choosing one of these.

Is a nightclub located in the heart of the Colonial Zone where you can hear the countries favorite music (Bachata, Merengue, and Salsa) to the early hours of the morning.

As I had mentioned before there are many more restaurants, cafes, bars and nightclubs to choose from but I wanted to give you a list of what we consider the popular choices. While walking around you will see many others, if you see one you like, just go in and enjoy.

MENU
Back To Top